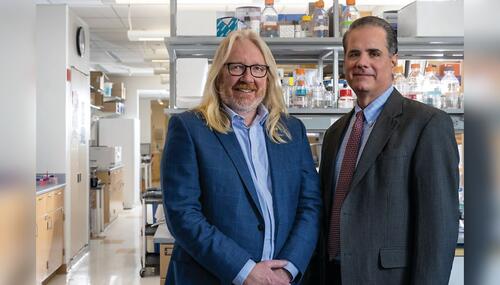 March 30, 2022
The holy grail of dermatology, says Michael Girardi, MD, FAAD, Professor of Dermatology, is a simple nonsurgical treatment for skin cancers. Dr. Girardi’s quest may soon be over. He and his collaborator, W. Mark Saltzman, PhD, Goizueta Foundation Professor of Biomedical Engineering, and Professor of Cellular and Molecular Physiology and of Chemical Engineering, have the grail within their grasp, thanks to sticky nanoparticles.

“Skin cancer is an enormous burden to our patients and our healthcare system,” said Dr. Girardi. “There are more skin cancers in the world than all other cancers combined. The incidence is mindboggling, and it keeps growing.” Some of his patients with basal cell carcinomas or squamous cell carcinomas have had five, ten, even twenty surgeries, with scars that run together. “An alternative that’s simpler for the patient, for the caregiver, and for healthcare management is a tremendous unmet need,” he said.

Enter Dr. Saltzman, an expert in nanobiotechnology who designs biocompatible polymers that deliver chemotherapy via nanoparticles small enough to penetrate a cell. Researchers in Dr. Saltzman’s lab had discovered, to their surprise, that they could make particles stick to tissues. They called them bioadhesive nanoparticles (BNPs) and sensed that they might be valuable, but at first didn’t know how.

“In fact,” said Dr. Saltzman, “we had spent 10 years trying to make particles nonadhesive. One of the paradigms in the field of cancer nano-medicine is that you want particles that you can inject intravenously and that will circulate for a long time.”

Someone in Dr. Saltzman’s lab suggested that since the new particles would stick to tissues, which included skin, maybe there were dermatological applications. Dr. Saltzman took the idea to Dr. Girardi. The two researchers had been in vague contact before, but this time they met and took a half-hour walk. “That first meeting was a big spark,” remembered Dr. Girardi, “this incredibly powerful brainstorming where we could understand each other’s worlds and then start to build a whole series of possibilities.”

Both had a family connection to skin cancer. Dr. Saltzman grew up in Iowa, where his grandparents were all farmers. “There’s lots of skin cancer in my family,” he said, “so this is personally important to me.” When Dr. Girardi was young, his uncle died from melanoma, leaving his three cousins fatherless. “That has always stayed with me in my research,” he said.

Dr. Girardi had long been concerned about sunscreens containing possibly toxic ingredients that penetrate the skin and circulate in the body. So, he and Dr. Saltzman first focused on developing a sunscreen made of sticky nanoparticles that wouldn’t wash off, wouldn’t breach the skin’s surface, and would better prevent the DNA damage that can lead to skin cancer. “It worked fabulously,” said Dr. Girardi. They published the results in 2015 in Nature Materials.

The new sunscreen is under development by Stradefy Biosciences, a company started by both doctors. Next, they turned their attention to skin cancer itself. Could sticky particles be used to treat basal cell and squamous cell carcinomas that penetrate the skin? Dr. Saltzman knew from research in his lab that nonadhesive particles injected into cancer cells simply diffused away. But when he tested the adhesive particles, they stuck to the cancer cells and slowly released their drug into the tumor. The most efficient way to deliver the BNPs turned out to be simplest—through a needle.

“The cancer cells took up the particles in a way we hadn’t fully predicted,” said Dr. Girardi. “We saw that we could deliver them right where we wanted them, into and around the tumor. In some iterations, a single injection basically cured our preclinical model of squamous cell carcinoma. To see that is incredibly exciting.”

In their initial tests, the scientists loaded nanoparticles with a potent chemotherapy agent called camptothecin (CPT). CPT is highly potent but imperfect, with many side effects and flaws related to its unstable structure. Drs. Girardi and Saltzman found that encapsulating it in nanoparticles made it more effective and less problematic.

“The nanoparticles do two things to CPT,” explained Dr. Saltzman. “They stabilize it and slowly release it, so that’s one advance. But also, since the nanoparticles deliver the chemotherapy locally, the CPT isn’t going into bone marrow or gut or tissue where it could have a side effect. The particles sit there delivering the drug right around the nucleus of the cancer cell. That overcomes many of the resistance pathways that cancer cells develop to survive chemotherapy.”

Next the two scientists loaded another weapon with the sticky particles—an agent called CpG, which stimulates the immune system. The one-two punch of chemotherapy plus immunotherapy devastated tumors in preclinical models. The scientists believe this combination could eradicate a tumor and prevent it from recurring. These results were published in 2021 in Proceedings of the National Academy of Sciences.

“I call it kill and thrill,” said Dr. Girardi. “You have a very efficient way of killing a bunch of tumor cells locally, and then the thrill of stimulating the immune system to get an even better response. And treating something locally in this way has the huge advantage of preventing systemic toxicity.”

For example, he continued, clinicians have learned that some drugs work powerfully in combination but administering them together and systemically at high doses is too toxic for most patients. BNPs make it possible to deliver one of those doses locally, thus preserving the synergy of the combination without causing toxicity.

To emphasize what these new possibilities means for skin cancer patients, Dr. Girardi contrasts two scenarios, present and future. In the first, the doctor numbs the patient with lidocaine, makes an incision, removes a piece of cancerous skin, then stitches up the patient, who returns a week later to have the stiches removed.

“Now imagine a parallel patient,” said Dr. Girardi. “In the same time it took to numb up the first patient, this other patient has already been treated and is gone, because instead of injecting lidocaine you’ve injected the nanoparticles. So, it takes less time for the caregiver and the patient, it’s more efficient, and there are fewer demands on the healthcare system, so the costs go down. And that’s just on the skin cancer side.”

He and Dr. Saltzman are now looking into wider applications of what they’ve learned, in conjunction with Stradefy. In preliminary tests, BNPs seem to work across different tumor types. The sticky particles bind firmly to the tumor matrix and slowly release their load into the tumor cells. Drs. Girardi and Saltzman have been meeting with surgical oncologists at Yale to develop a way to use BNPs to treat metastatic melanoma. Dr. Saltzman is exploring BNPs against ovarian cancer cells, pancreatic cancer cells, and glioblastomas. He has been using nanoparticles on glioblastomas for a long time, he noted, “but we’ve discovered that these sticky particles work a lot better. There are probably many other solid tumors where this would work brilliantly, like in the prostate, if you could get the tumor at the stage where it’s accessible by needle.”

He and Dr. Girardi have started talking about how to conduct clinical trials for BNPs in skin cancer, which they hope to begin late in 2022 with a clinical treatment available in three to five years. The holy grail is within reach.

Submitted by Emily Montemerlo on March 30, 2022

Thank you for your interest in a research position in our lab! We have an application process to help match interested students with mentors and current research projects. Submission of applications are rolling, but we will review all applications on September 14th (fall term) and January 18th (spring and summer term). If you have any questions about the application, please contact anna.lynn@yale.edu. We look forward to receiving your application.